A Brief Introduction to Canoe Polo

This is our beginners guide to the rules of canoe polo. Canoe polo is an exciting and fast game, though it can often seem bewildering to a beginner. Fear not! It's really not as confusing as it first seems, and hopefully this guide will shed some light on the rules.

Canoe polo is played by two teams of five players, each with up to three subs. Played on any piece of flat water large enough to take a pitch, the aim is to score goals in nets suspended a couple of metres above the water. And that's it! Any other rules serve one of two purposes: -

So, if you bear in mind these two ideas, all the rules that follow make sense. The rest of this guide is broken down into sections explaining different rules. Here goes... 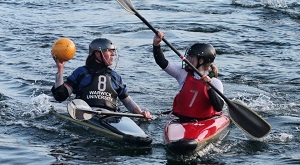 The pitch is about 23 x 35 metres (but polo is often played in slightly smaller pools - our own University pool, for example). The side lines and goal lines of the pitch are marked by floating ropes, or the sides of the pool. If the ball goes over one of these lines, it's out of play, and there is a 'free throw' where the ball left the pitch. The pitch looks like the one below:

Substitutes wait in their own substitute's area. Players on the pitch can paddle round the back of the goal if they want to.

Goals are suspended 2 metres above the water. They are 1.5 metres x 1 metre, they each have a net, and red stripes on the poles to make them easier to see.

Balls are the same as used in water polo (Size 3 for Ladies, Size 4 for Open teams). Games last between 6 and 10 minutes each way, with a half time.

There can be up to eight officials, but there are normally just two referees (one for each side of the pool), a time keeper and a scorekeeper.

Each team has five players on the pitch and a maximum of three substitutes. Each player has kit which can be very specific to polo. Every player must have: -

Players are not allowed to wear jewellery (e.g. rings and watches), although glasses can be worn. 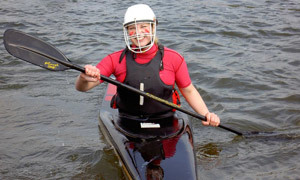 The two referees give signals to show you what is happening - these are shown later on. In general, one arm points in the direction of play, and the other tells you about what the offence was. See referee's signals later.

There are two types of 'free throw' (like a free kick in football). These are indirect (a free throw) or direct (a free shot) depending on the offence.

For both free throws and free shots, the player taking the throw/shot must present the ball by holding it above their head.

Players have only five seconds in possession of the ball to keep the game moving quickly. Five seconds is a surprisingly long time in a game! 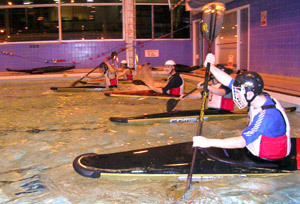 At the start of the game, both teams line up at their own end and one player from each team sprints to win the ball which is thrown into the middle of the pitch. Don't start before the whistle though - that's cheating!

The whole ball must enter the goal for a goal to count.

After a goal is scored, both teams line up in their own half. Play is restarted by the team who conceded the goal, on the referees whistle.

Substitutions can take place at any time during the game. You must completely leave the pitch before your replacement can come on.

Officially, play does not stop for a capsized player unless they are causing an obstruction or are in a dangerous position. We make an exception to this for beginners though, so don't worry! 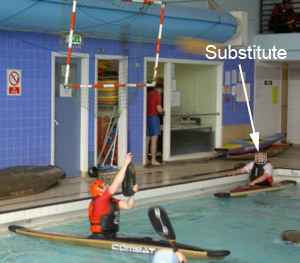 Theoretically, it is totally legal to push other players in if they have the ball. However, we play no pushing for the first month or so, so no worries there either!

As well as using your paddle to manoeuvre your boat, you can also use it to play the ball. However, paddles are very hard, and most experienced players have had a nasty knock or two from a carelessly placed paddle (why do you think we have face guards?!). For this reason, we are very strict from the start about using your paddle in the wrong way. Nobody will get hurt as long as you stick to the simple rules below:

Another unfair use of the paddle is pushing off another player's boat or the side of the pool.

A kayak tackle is moving your kayak against an opponents kayak to win possession of the ball.

A jostle is moving your kayak to try and get in a position to attack or defend a goal. You can only do this within six metres of a goal.

These are both absolutely fine, though you cannot hit an opposition kayak hard in the side, and you are not allowed to aim for the opposition's body!

Don't deliberately stop another player from getting to where they want to go (except if you're jostling near a goal)! Don't hold on to another player with your body or paddles, no matter how much you like them! You are also not allowed to lean on other people's boats or the side of the pool.

Foul On The Goalkeeper

Goalkeepers have special privileges. A goalkeeper is the defender most directly under the goal. They normally have their paddle in the air to save shots.

You aren't allowed to move or unbalance a goalkeeper by paddling into them. 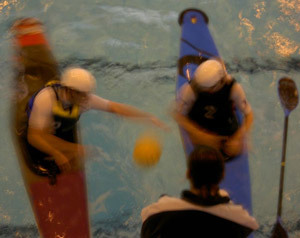 The referee can give several sanctions (punishments) for illegal play. These are free throws, free shots, penalty shots, and a range of 'cards':

A Penalty shot is given for fouls preventing a near certain goal.

In a penalty shot, all players from both teams must go behind half way apart from the goalkeeper. One attacking player remains with the ball and is given five seconds to shoot.

Sometimes there is need for play to be started when we don't know whose ball it should be. This is done by a referee's ball.

One player from each team lines up at the side of the pool facing the referee. The ball is thrown between them, and play begins.