I'll put more information up later, but to keep it simple for now, here are a few sessions. I have put one session in for, as I understand it, training in the lactic zone, aerobic zone and for training speed. I've ripped off the Hammond and the Palermo from www.teestigers.com. If you're moving up north, join them!

Lactic zone sessions [Back to top]

This should help build your tolerance to lactic acid, as I understand it, so you can work harder for longer. Encourage your team mates! It makes a lot of difference getting a bit of encouragement, it's all about trying as hard as you can and not letting yourself give up. It's advised that you should build your aerobic fitness a bit before you try these sessions so that you can get the most out of them.

Lactic pyramid shuttle [Back to top] 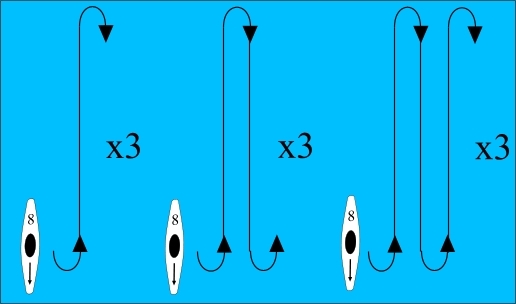 This one is best done in groups of four.

This will result in increasing effort and reducing rest on the way up the sets, and the reverse on the way down. You get the pyramid idea.

The Palermo [Back to top] 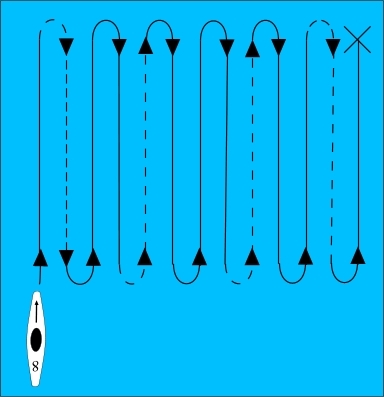 This should be completed paddling as fast as you can. Dotted lines represent slow paddling. You think this diagram is confusing? Try the next one.

This is one set, you should be looking to do at least four. Have a minute rest between each set.

The Hammond [Back to top] 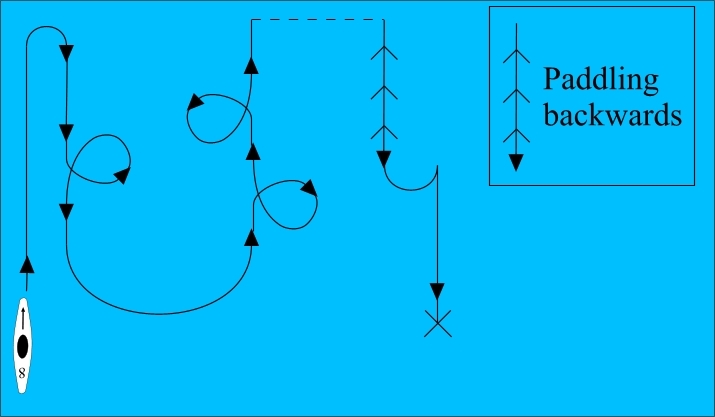 This should be completed paddling as fast as you can. This is a very confusing drawing, but I thought I'd have a go! The text should explain it better.

Find two points approximately 20m apart. Each set is four lengths, paddle as fast as you can through out the exercise.

This is one set, you should be looking to do five. Have a forty second rest between each set.

I think the idea of this session is to train the level of effort where your body is using oxygen at the maximum rate that it can supply it. I've been trying these more recently and they are hard, but feel good.

Paddle as hard as you can for 4 minutes, either on a course you've devised, or just straight line. Rest for four minutes. Do this four times, or five if you can just about manage it. If you can do more, you're probably not trying hard enough.

Aerobic zone session [Back to top]

The idea of this is to build your aerobic fitness, which as far as I understand is the ability of the body to keep supplying your muscles with oxygen so that they can burn food without the build up of lactic acid. There are places where you can find information on calculating your heart rate in the aerobic zone, but as a guide you should be breathing fairly heavily and paddling at a level of efffort that you can sustain for the length of the session.

Paddle out [Back to top]

It's just a flat paddle for 40 minutes. Either four lots of ten minutes with a minute between each to enjoy the lovely Leamington scenery, or a straight 40 minutes. Keep it going, try and get into a rhythm, keep an eye on your posture and technique in general. Due to me not doing this enough, I can't get my heart rate up to 150-160bpm like I would on a running/rowing/cycling machine without my arms getting knackered, but try your best and you will improve!

It's recommended by scientists that this session should be performed topless on a sunny day.

Speed Session [Back to top]

Sprint speed shuttle [Back to top]

This works best with groups of around eight. Find two markers a distance apart that takes around 15s to complete at a flat out sprint. The first player sprints to the end, then when they are finished the next starts and so on until everyone is at the end, chat for a few seconds. Then the first player starts this again, paddling back to the start. This is repeated 15 times. If you have fewer people, this should be arranged so that there is around 2 minutes of rest between each sprint!

Really concentrate on getting away quickly and keeping good powerful technique up all the way through.