Here are my attempts at explaining some defensive tactics. It's all a bit idealised, but I think it's realistic enough. For now I've done some defensive arrangements: a four man zone/two and two, whatever you call it, a 'two out' arrangement and 'five-out'. Whites are the defending team, reds are the opposition (attacking) team.

It is likely that these tactics will merge into one another throughout a game,ï¿½but it's useful to treat them in isolation to get an idea of the common theme of being careful not to leave the opposition free to make easy passes and shots while trying to win possession to varying degrees, from a four man zone where the opposition are left to make the mistakes to a five out situation, where possession is actively won back. 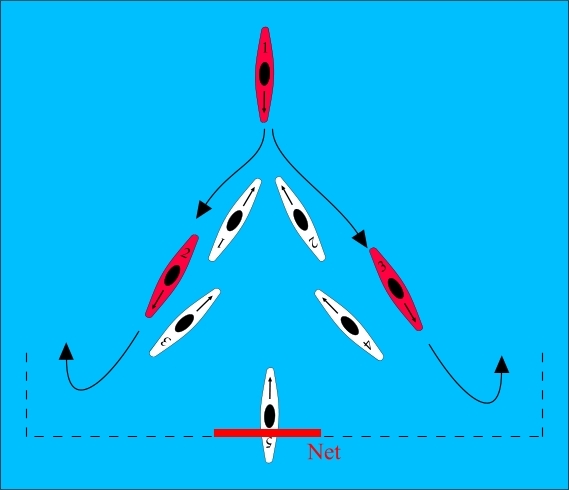 The defending team forms a 'Christmas tree' shape in front of the goal keeper. 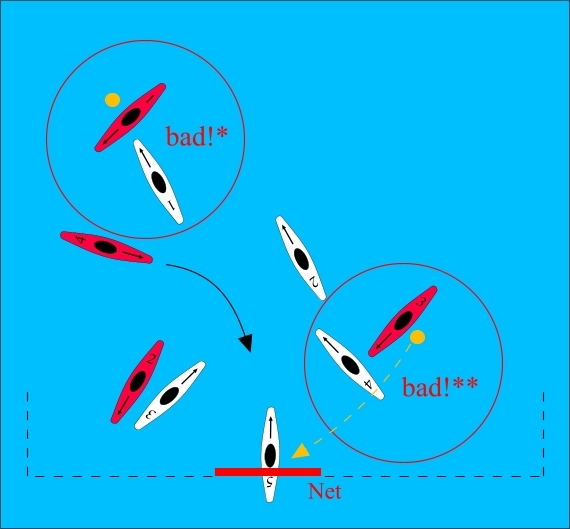 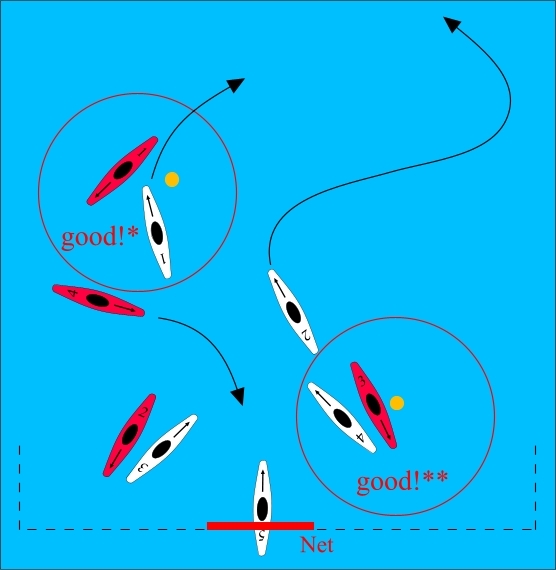 * Player 1 has left formation to intercept a loose ball, and has a good chance of winning it. Player 1 can dribble the ball on, while player 2 sprints up the pitch in support, paddling up the right wing then making a diagonal run towards goal such that a pass from player 1 can easily be received from the side, before shooting. Players 3, 4 and 5 can support, making sure they do not leave themselves open for a counter attack.
** Player 4 has put some effort in, turned opposition player 3 away from goal and ended up next to them, making a shot difficult, and putting opposition player 3 under pressure.

This is an attempt at something in between a four man zone and five out. When the game is perhaps 1-0 to the opposition, and a goal is required, but five out is considered too risky (perhaps the opposition are stronger and faster and are likely to get free and take advantage of an open goal.) Hopefully the diagrams below will explain some obvious good and bad actions, and some of the difficulties with this system. 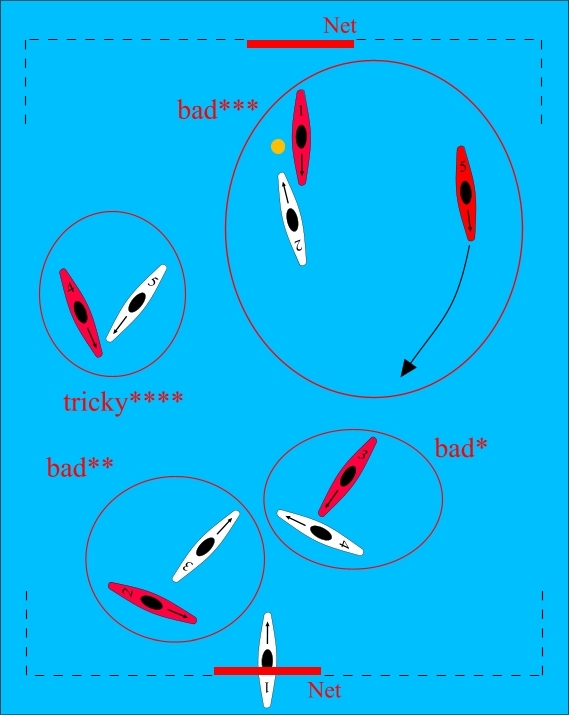 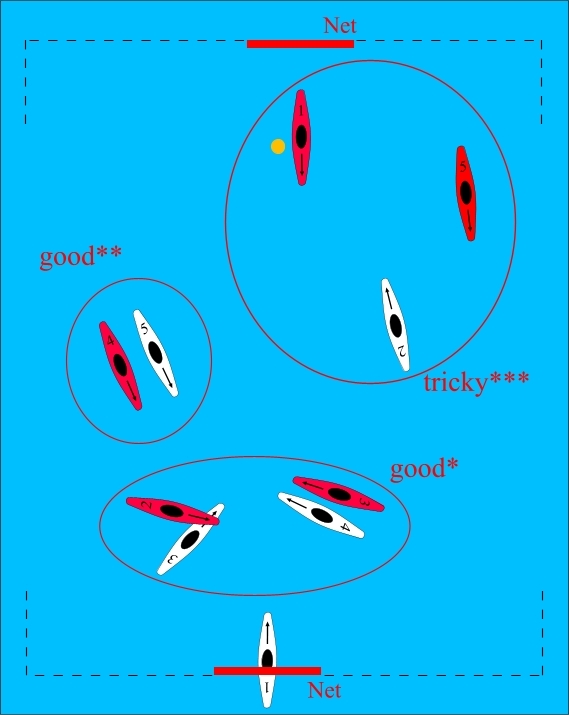 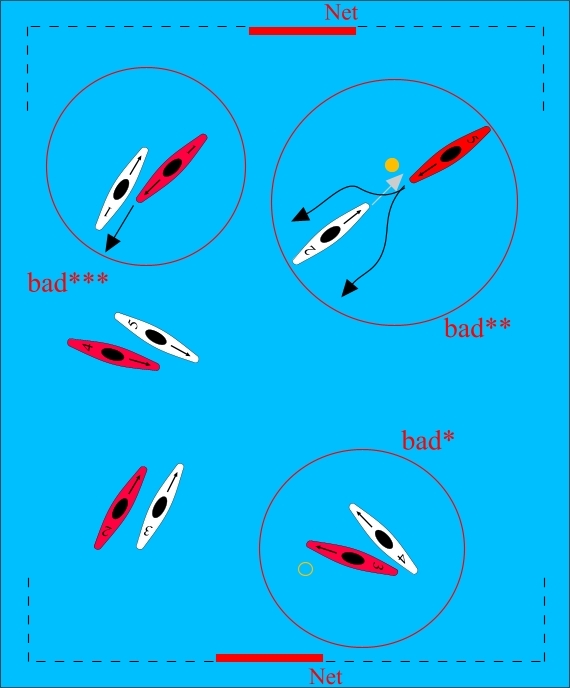 Here are my attempts at explaining some attacking tactics. Here I've tried to explain a collection of sensible team work, rather than set plays because I don't know any and I don't want to start making stuff up until I've tested it! This is presented as a bit of a collection of rules, but remember: "Rules are for the obedience of fools and the guidance of wise men"! Whites are the attacking team, reds are the opposition (defending) team.

I found a quote here (Clyde's Polo Page) which I think sums up the ideas here too:

An unsuccessful shot, unless you are lucky and it touches one of the other team before it goes off, effectively hands the opposition the ball when you are in a vunerable position. 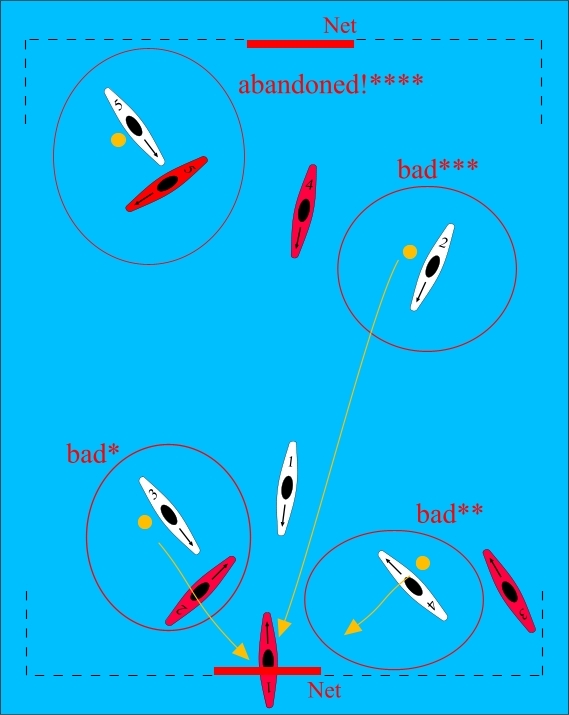 * Player three has tried to shoot past opposition player two and the goal keeper, both of whom are in a good position to block the shot.
** Player four has tried to take awkward shot across the body instead of passing the ball to player one who is facing goal, close in and so has a good position to shoot from.
*** Player two has taken a long shot, which the keeper then has ages to watch coming in and block, they are in position so can't be lobbed. The ball should be passed to player one.
**** Player five has been abandoned and the only passes open are through paddles or awkward, slow, high looping passes over player five who has a good chance of intercepting these too. 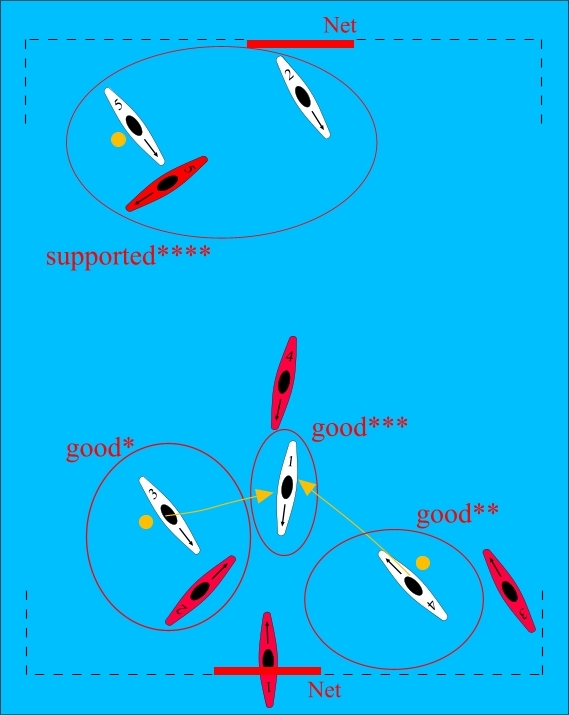 The attacking team should not leave themselves vulnerable to a counter attack. 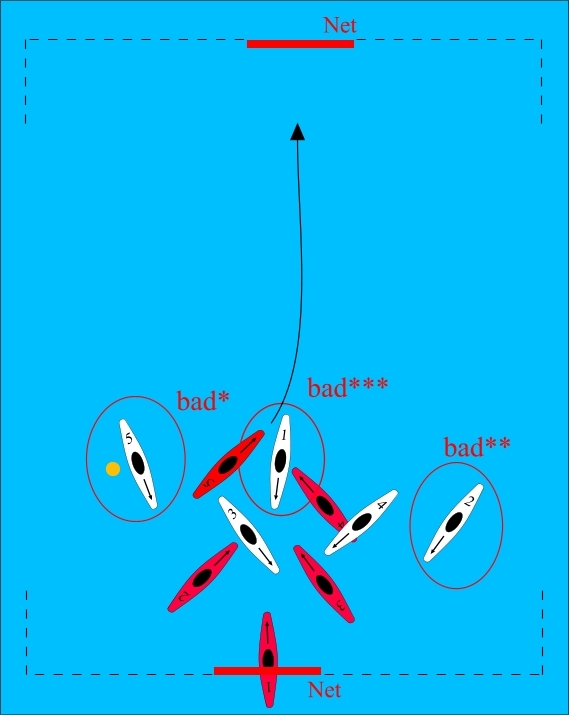 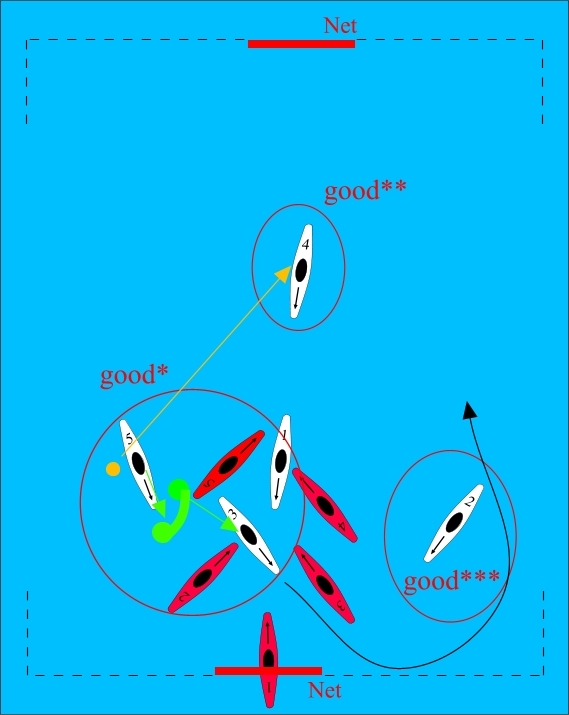 *Player five has passed the ball back out to player four and communicated to player three that they are coming in to attack the zone. Player three can then paddle out of the zone and support player four, while in the process causing disruption and driving defending players across to one side.
**Player four has moved out to provide a link between players two and five, and provide player five with somewhere easy to pass to while attempts to make openings in the opposition defence continue.
***Player two can receive a pass from player four now, and draw players across to one side by 'looking threatening'. If player three manages to drive opposition player three away from goal, player two might be presented with a good shooting opportunity.

Don't be lazy! Everyone wants to score, but this should be the easy part of a well executed attack. The attacking team need to try to create openings in the opposition's defence so that a shooter has a one-on-one shot against the keeper. This takes effort and may seem like a thankless task, especially when someone at the back loses the ball and all your effort was in vain, but persevere! The tips here are a bit idealistic, but have a go and see what happens. 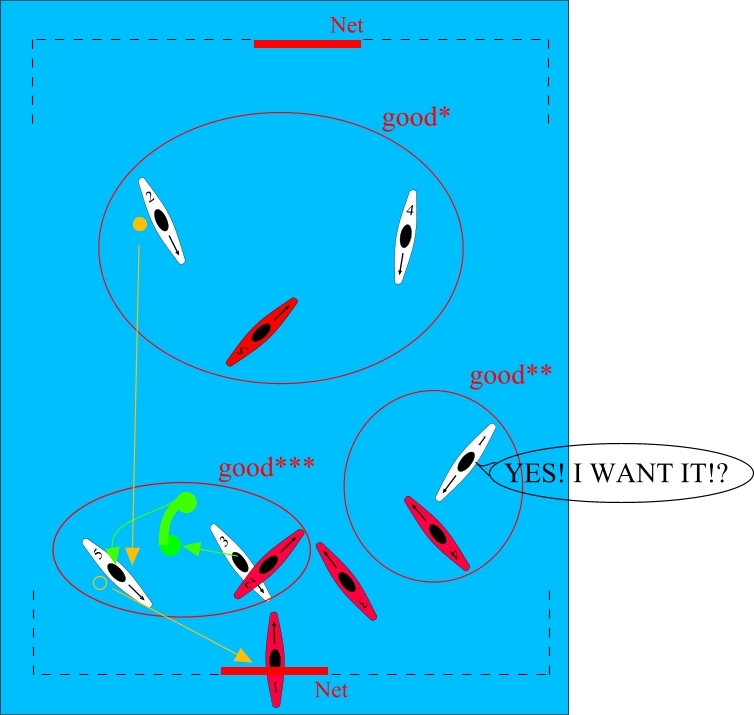 *Players two and four are controlling the ball further down the pitch, drawing opposition player five out of defence to chase the ball.
**Player one has made a diagonal run in and is screaming for the ball (which is ignored by the rest of the attacking team because they know player one has no chance of getting a good shooting opportunity from there). Opposition player four comes across to mark player one and opposition player three is perhaps distracted for a moment.
*** Player three has communicated to player five that they are going to make a run in and drive opposition player two across to the right,ï¿½player five sprints in towards goal,ï¿½receives a pass from player two and has aï¿½shot at goal from a reasonably good position and probably scores. The whole team created the goal. If they didn't score, players one, two and four are in a good position to cover any counter-attack.

Here is a set piece attack to try. We'll try practising it and see if it works. I don't see why it shouldn't. The diagrams below split it up into two parts. 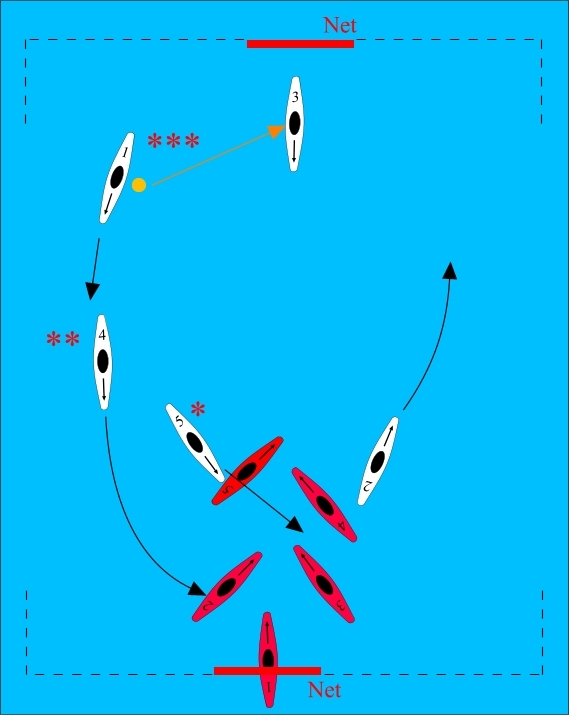 *Player five starts to drive the front two zone players across, and keeps them occupied. Player two has come out from attacking the zone to help player three keep possession of the ball at the back.
**Player four paddles in to start driving the rear two players across and away from their goal line.
***Player one gets rid of the ball and starts following player four at a leisurely pace. 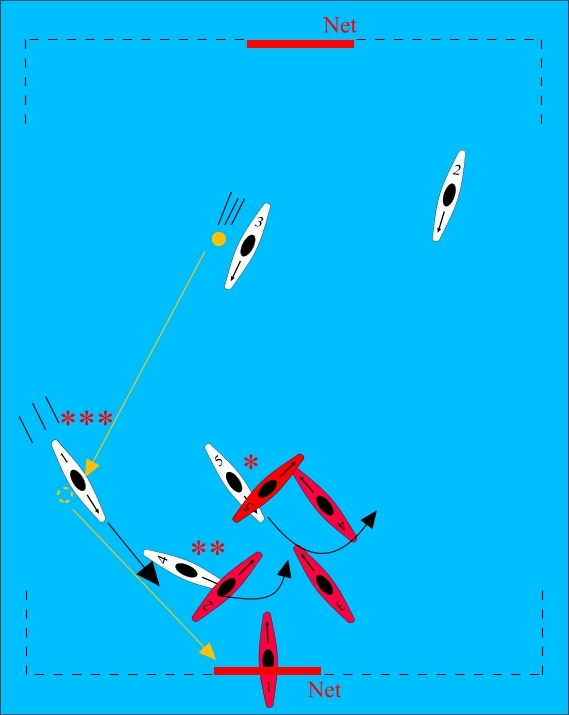 * and ** Players four and five continue driving hard across and out of the opposition zone, trying to occupy the opposition players, create chaos, keep their paddles down in the water etc., while preparing to get out of the zone and back to defence in case of a counter attack.
*** Player one accelerates, approaches the goal from behind player four, at top speed, receives a quick pass from player three and shoots.

Here is another set piece attack to try, this time from a corner. We'll try practising it and see if it works. I don't see why it shouldn't. The diagrams below split it up into two parts. 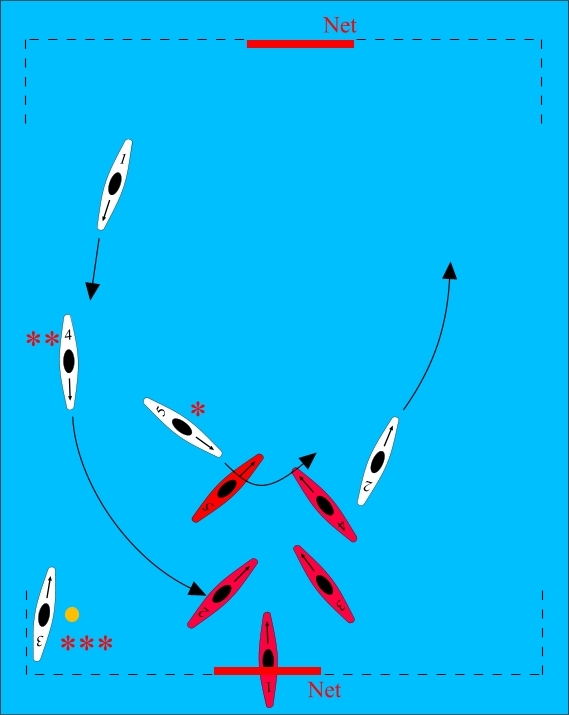 *Player five starts to drive the front two zone players across, and keeps them occupied. Player two has come out from attacking the zone to cover the back. This time, player five tries to finish their drive such that they are in between the zone and their own goal, facing their own goal so that they can easily sprint back to defend if there is a counter attack.
**Player four paddles in to start driving the rear two players across and away from their goal line, also making their way back out in case of counter attack.
***Player one starts paddling down the side of the pitch, behind player four and turns in to sprint diagonally towards goal. 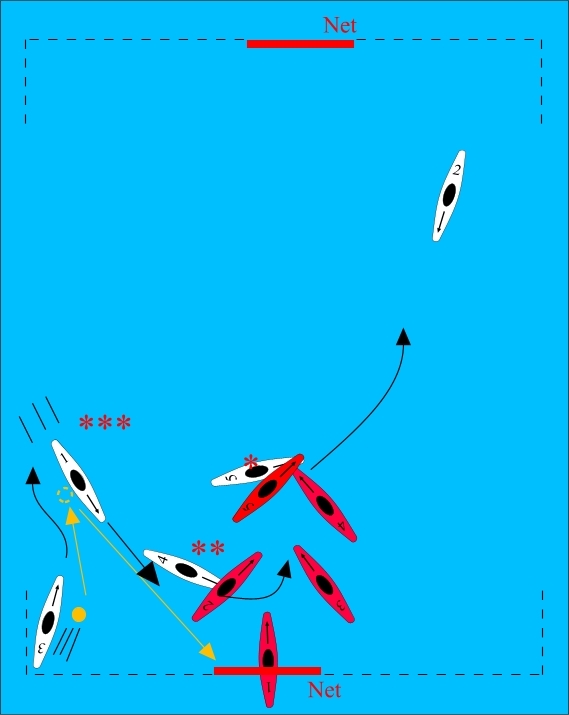 * and ** Players four and five continue driving hard across and out of the opposition zone, trying to occupy the opposition players, create chaos, keep their paddles down in the water etc., while preparing to get out of the zone and back to defence in case of a counter attack.
*** Player one accelerates, approaches the goal from about 45 degrees to the goal line, at top speed, receives a quick pass from player three, who is taking the corner, and shoots.

We will experiment with people marking the player taking the corner. The pass from the player in the corner may have to be low and hard to avoid being blocked by any defenders close by.